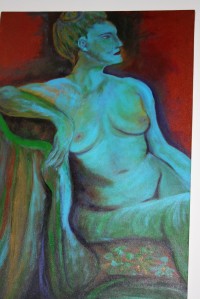 Visiting Nining Muir in her studio at Art Explosion was like walking in to a museum gallery without the help of an audio tour or docent. Trying to get her to open up about her work and her process was a bit like pulling teeth. Many of her paintings have a definite message, from the brutality of the meat industry to her feelings about her emigration from Indonesia; however, her low-key ego insists that I, as the viewer, determine my own meanings from her work since she only occasionally hinted at what I should or shouldn’t get out of the experience. Her opinion in this matter is summed up by the artists’ quote on her website http://www.niningmuir.com:

What the eye beholds
The tongue need not explain.

To this, she also added another characteristically Nining Muir quote in response to my badgering for more fully developed answers to our blog Five Questions: “You wanted more? Less is more; here you go.” I then realized that it would not be easy to pin her down on much about her process. She says that she dislikes “the process of blathering about process” and that “visual art” to her “is simply that: visual.” After a series of questions that weren’t being answered with the detail that I felt they deserved, I was then surprised by her answer to my question about any special or rare materials that she has used in her work. Catching me off-guard, she responded by pointing to one of her paintings, “Blood Oil”, (shown below, over her left shoulder) which depicts a gushing well; the oil and sky in the painting contains the artist’s own menstrual blood. 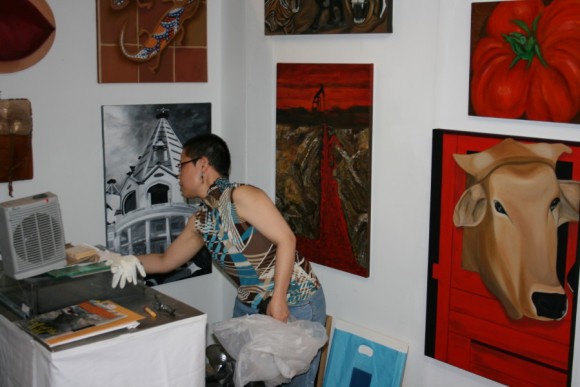 While many of her images are positively political in dramatic, bloody realism, the same number are more in the pop art category, with the former portraying such things as cows being mutilated for slaughter and in the latter, her cows are brightly colored with cartoonish smiles. After pressing from me about why cows are a favorite subject of hers, she finally opened up by saying:

I’ve painted a lot of cows. Why? I don’t know; I felt like it. One cow painting led to the next. Some turned out to be gruesome, some fanciful, some had a political dimension; others simply reflected my mood at the time of their creation. I guess mood matters. Often a painting starts out one way and changes direction radically, all because of the way I’m feeling. Will people find that interesting? Maybe, but frankly I’d rather have them look at my work, look closely, walk away and then come back and look some more. It’s all about looking, about what’s visual. I’m a visual artist. I’d rather leave interpretations to the viewers (or the curators).

When asked about the influence working at SFMOMA has had on her work, she feels that one of the best things about working here has been in getting to “meet all of the other artists who are also [on] staff” and in getting to see other people’s work. Her favorite pieces at the museum include works by Anselm Kiefer, Frida Kahlo and Nathan Oliveira.

While the artist is impenetrable, her artwork is entirely accessible. After interviewing Nining and coming to terms with the fact that she was forcing me to make my own judgments about her work, I realized that this is the best way to approach viewing art, anyway. As a viewer, I’m going to like what I like, regardless of the story behind the work, or what the artist intended to get across. It is about my experience, and I don’t have to view a work through a political or cultural lens; the viewer sees what he or she wishes to see.

Nining Muir sits in front of the diptych, “Vietnam Vertigo” to be displayed in Last Call Staff Art Show.